GameStop reported a loss of $147.5 million over the period that included the 2021 holiday season and announced that it would launch its marketplace for non-fungible tokens by the end of Q2 2022.

Despite the losses, revenue is growing at the Grapevine-based video game retailer on a mission to modernize its e-commerce operations.

GameStop saw a $1 billion increase in annual sales in 2021 compared to 2020. And it saw $2.25 billion in sales during the fourth quarter, which includes the holiday season, a slight increase from compared to its sales of $2.19 billion in the pre-pandemic fourth quarter of 2019. Still, the company is burning cash to the tune of a loss of $1.94 per share, according to filings.

“We are still in the early stages of our transformation,” CEO Matt Furlong told investors Thursday, adding that the company’s new management has had to reinvent the business from the inside out. “GameStop is a completely different company today than it was at the start of the fiscal year.”

Over the past year, GameStop has changed its board and management team. It also said it has hired hundreds of new employees with an e-commerce background. It invested in new order processing facilities and an improved customer support call center, launched a redesigned mobile app and expanded its product catalog to include more PC gaming accessories and technology. .

It missed the video game industry’s shift from physical software sales to digital, but the retailer signaled to investors that it was seriously considering capitalizing on the booming world of non-fungible tokens beginning with the launch of its NFT market later this year.

GameStop announced in February that it had partnered with an Australian startup called ImmutableX to launch a marketplace where creators could sell NFTs for use in video games. NFTs use blockchain technology to assign a unique identifier to a digital product, allowing a person to own it. In the gaming industry, companies have proposed using NFTs to power unique in-game props or real estate.

Wedbush Securities analyst Michael Pachter said seeing GameStop losing money over the holiday season was shocking, and he wondered if an NFT market for games led by GameStop was even feasible.

The analyst pointed to GameStop’s history of serving console gamers and largely ignoring PC games. The retailer is expected to develop partnerships with console makers Microsoft, Sony, and Nintendo to make its NFT marketplace compatible with consoles. On PC, it would probably require a video game distribution platform like Steam or a relationship with one.

“How do you introduce your NFT into the game? And if you’re the game developer, do you want GameStop to take a stake?” Pacher said.

It’s unclear how GameStop’s marketplace would work. In its documents, GameStop lists its new initiatives in the NFT space as a potential risk for investors. 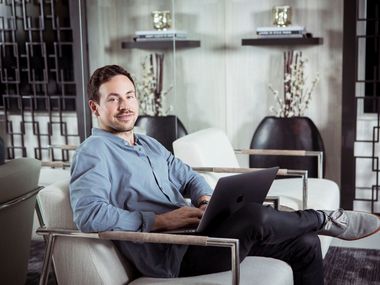 GameStop Chairman Ryan Cohen, who pledged to turn the company around when he took office, hasn’t said anything publicly since tweeting about how the government should crack down against hedge fund short sellers on Wednesday. His activist investment firm RC Ventures recently disclosed a 10% stake in Bed Bath & Beyond and is pushing for the sale of all or part of that business.

The company’s share price has been falling since January 2021, when it peaked at $325 per share, pushed to astronomical levels by retail investor enthusiasm. It has fallen by 60% in one year.

GameStop has closed nearly 200 of its physical stores in the United States over the past year. The pace of store consolidation in the U.S. has slowed since 2020 as it leans more into its e-commerce business and tries to avoid bigger losses. GameStop still operates 3,018 stores nationwide, including 305 in Texas, more than any other state.

The retailer’s losses also ballooned year-over-year in the third quarter ahead of the holiday season, which GameStop attributed to increased spending on additional inventory needed to meet increased demand. Furlong said Thursday the company would continue to have more inventory than it did before the pandemic and focus on long-term growth. He declined to provide forward-looking advice, however.

“If GameStop is going to be a game market leader again…we had to lay a lasting foundation rather than take shortcuts,” Furlong said.

Sleepy Hollow doesn’t look sleepy or hollow this month – with people desperate for holiday cheer. Seaside Ranchos, the cozy neighborhood tucked away in South Torrance colloquially known as Sleepy Hollow, has for years been home to a beloved and hugely popular local tradition of elaborate holiday lights and displays. Christmas lights have been a […]

Can’t wait for Christmas? You’re not alone. This is why the revelers of Abbeville have something to celebrate. The Christmas parade will begin at 11 a.m. on December 11. As of Friday, up to 30 attendees had registered, including Abbeville High School cheerleaders, the American Legion, Abbeville Baptist Church, WCTEL and Commercial Printing. And of […]

While it’s not yet December, the holiday celebrations are already in full swing at the four theme parks that make up the Walt Disney World Resort in Orlando, Florida. Resort-wide Christmas festivities take place this year from November 12 to December 31, with fresh entertainment, enchanting decor, special merchandise, and seasonal food and drink offers. […]